The Best Vineyards. The Best Winegrowing Regions. The Best Grapes. The Story of La Crema is a Story of Superlatives.

When La Crema was founded in 1979 as La Crema Viñera, meaning the Best of the Vine, the name was intended as an unabashed boast: These vineyards produced the very best grapes in the region. Today, the name has been shortened to mean, simply, the best, and La Crema’s wines represent the best grapes from preeminent cool-climate regions in California and Oregon.

La Crema wines—inspired by Burgundian-style Chardonnay and Pinot Noir—are made in small lots that nurture distinct flavors and balance. The end result is elegant wines that are unswerving in quality over time. 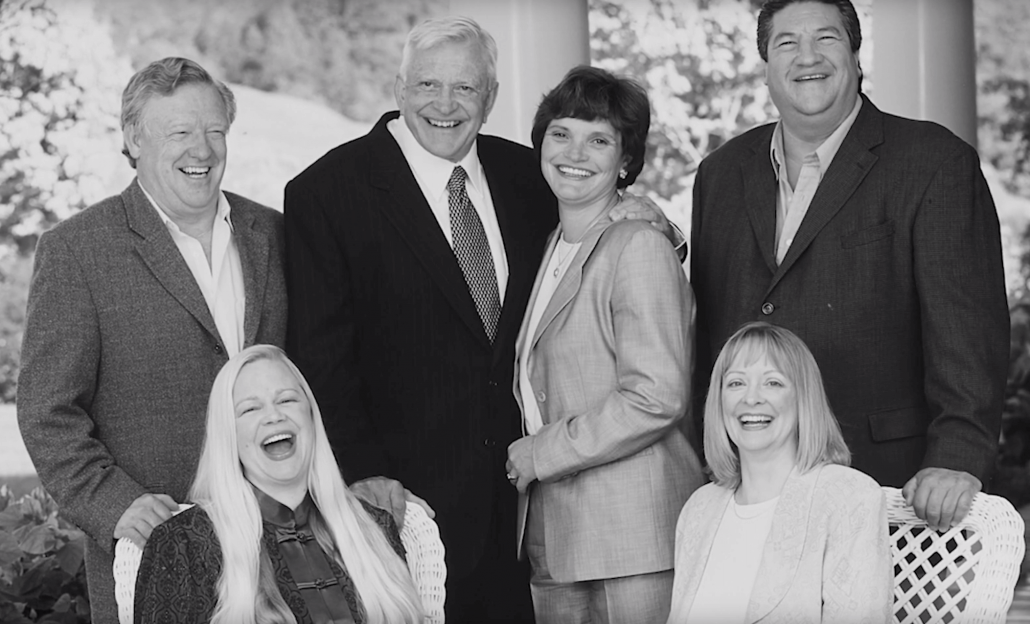 La Crema began at a time during which few wineries in California were making Pinot Noir, and even fewer were doing so with a single-vineyard focus. A group of wine lovers ran the show back then using old-world techniques such as whole-cluster pressing and open-top fermentation. This was a great foundation for winemaking, but with stellar fruit from exceptional vineyard sites, there was always the opportunity for more.

That evolution took shape in the early 1990s when Jess Jackson and Barbara Banke imbued the winery with the artisan ethos it retains today. Their vision for the future was simple: That Pinot Noir should be as popular as Cabernet Sauvignon and Merlot, and La Crema could be the vehicle to do just that. They also loved that the winery was a pioneer of single-vineyard designate wines, and saw this as an important differentiator.

Jackson and Banke purchased La Crema in 1993 and produced the first vintage in 1994. Two years later a new winery was constructed in the fog-shrouded, redwood-lined Russian River Valley appellation. Jackson’s daughters, Laura Jackson Giron and Jenny Jackson Hartford, along with his sons-in-law, Rick Giron and Don Hartford, took on leadership roles at La Crema: managing the day-to-day operations and representing the winery out in the market. With a renewed vision, resources, and leadership, a new era had begun. 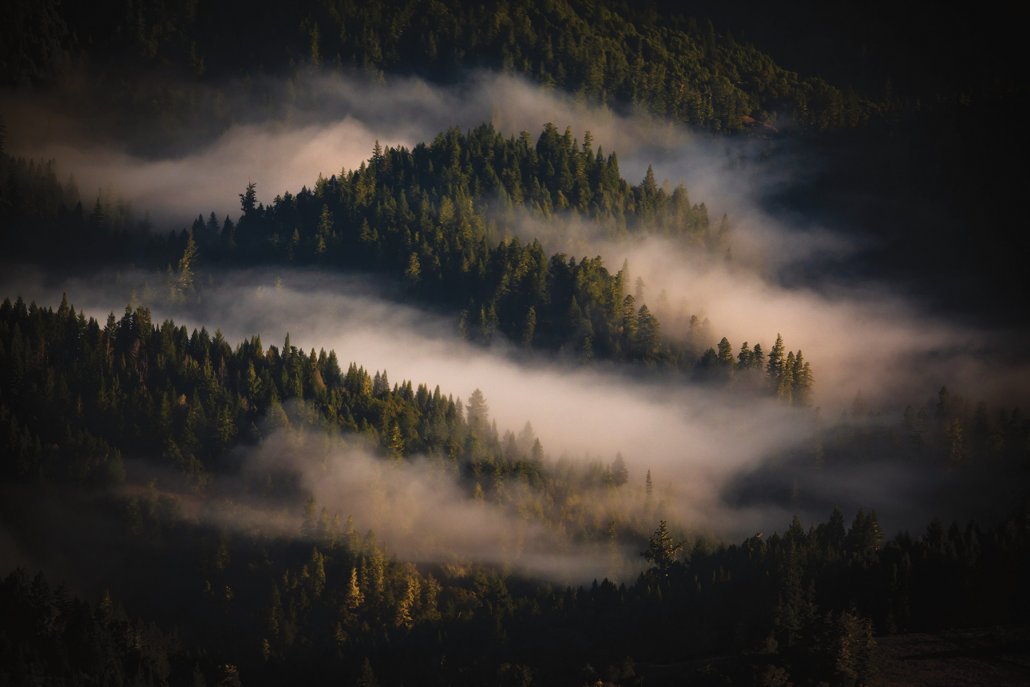 Initially, La Crema focused efforts on developing wines from the Sonoma Coast, deemed the next great appellation for Pinot Noir, using artisan, boutique-style production techniques, like gentle handling, precision sorting, and crushing grapes in small batches. The winery then set its sights on bringing in the best talent available at the time. Some of the winemakers during this period included Rod Berglund, Jeff Stewart, and Dan Goldfield. The list was an all-star lineup of winemaking greats and experts in Pinot Noir and Chardonnay.

Right after the new millennium, La Crema set out to nurture an estate vineyard program comprising the best cool-climate sites along the West Coast. The winery began working extensively with fruit from appellations such as Sonoma Coast, Green Valley, Anderson Valley, and Los Carneros, extending its reach into Monterey in 2008, and then to Oregon’s Willamette Valley in 2012. Though these growing regions are different, the vineyards themselves all fall within cool-climates with well-drained soils that restrict yields and produce distinctive, balanced wines. For La Crema, these technical similarities were keys to delivering the best of the best to its customers.

“Jess always felt that if you could grow your own grapes, you have a much better chance of really being successful in controlling the quality of your wines,” Don Hartford says, noting that farming the vineyards sustainably also helps grow the very best fruit.

Over the course of the last decade, the winery has continued to add wines from cool-climate vineyards in California and Oregon. Perhaps the most notable of these spots is the iconic Saralee’s Vineyard in Russian River Valley. As a result of their long-term grower contract, La Crema had been receiving coveted Pinot Noir and Chardonnay from the renowned vineyard for years and developed a close relationship with Richard and Saralee McClelland Kunde. When the Kundes approached them about buying the historic property in 2013, La Crema jumped at the opportunity. The winery launched a three-year rehabilitation of the circa-1900 barn on the property and reopened it as the La Crema Estate at Saralee’s Vineyard in 2016. Today, the convivial hospitality center that looks out on undulating hills of vines serves as the yin to the yang of the new and modern tasting room in downtown Healdsburg.

MAKING THE BEST OF THE VINE 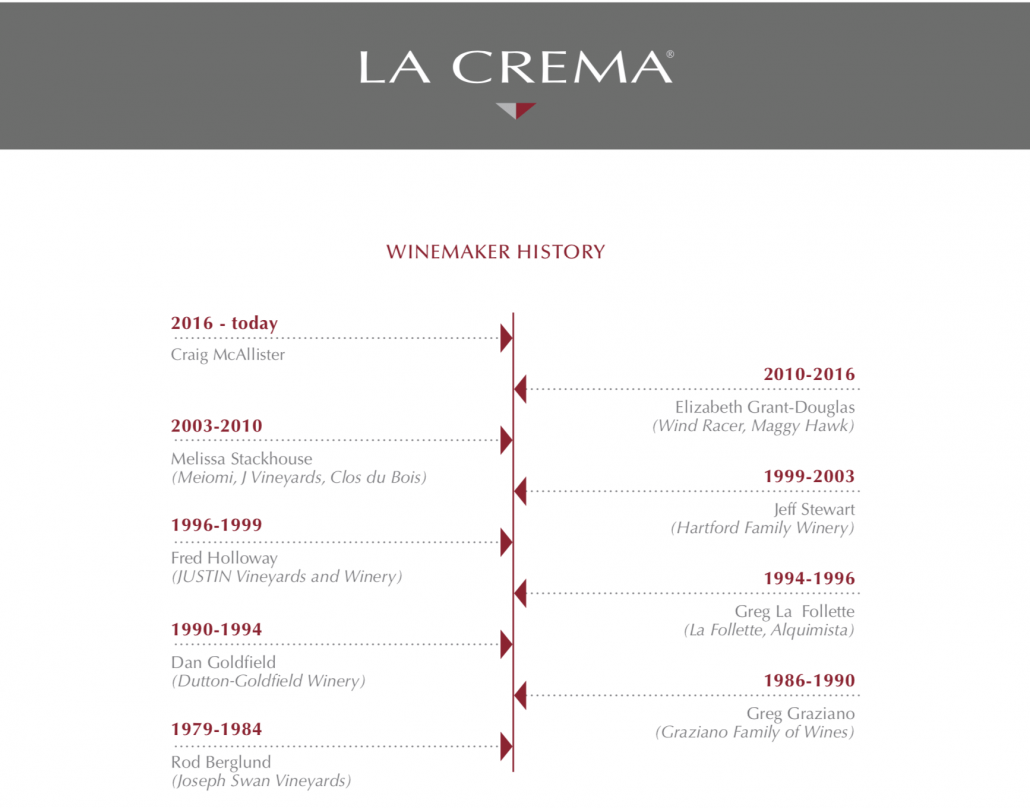 In recent years, the winery has operated under the expertise of Head Winemaker Craig McAllister, who has been with the winery since 2009. McAllister continues to nurture and maintain the winery’s reputation of producing high caliber, cool-climate Chardonnay and Pinot Noir by overseeing production from Willamette Valley in Oregon to Sta. Rita Hills in California. Along with the production team, McAllister samples grapes from every block of every vineyard, tasting each lot to craft the best wines possible. According to McAllister, the process is high-touch but low-intervention, something that’s a rarity for wineries at La Crema’s scale.

“There’s an authenticity to our wines—we allow the grapes to fully express themselves without manipulation in the winery and they’re made in traditional ways,” he says. “We barrel-ferment Chardonnay and punch it down by hand, as it was done in La Crema’s early years.”

For McAllister, quality and consistency are key. When he interacts with customers and fans of the winery, this is what he hears the most: That they take comfort in knowing that they can depend on La Crema and that they’ll be getting a quality wine year after year. McAllister says this consistency can be attributed directly to the fruit and by way of using micro tanks and small French oak barrels. He adds that the winery’s track record also is reflective of the kind of continuity that comes from being family-owned with access to estate vineyards, farmed to the specifications of the winemaker, to achieve the optimal harvest each year. 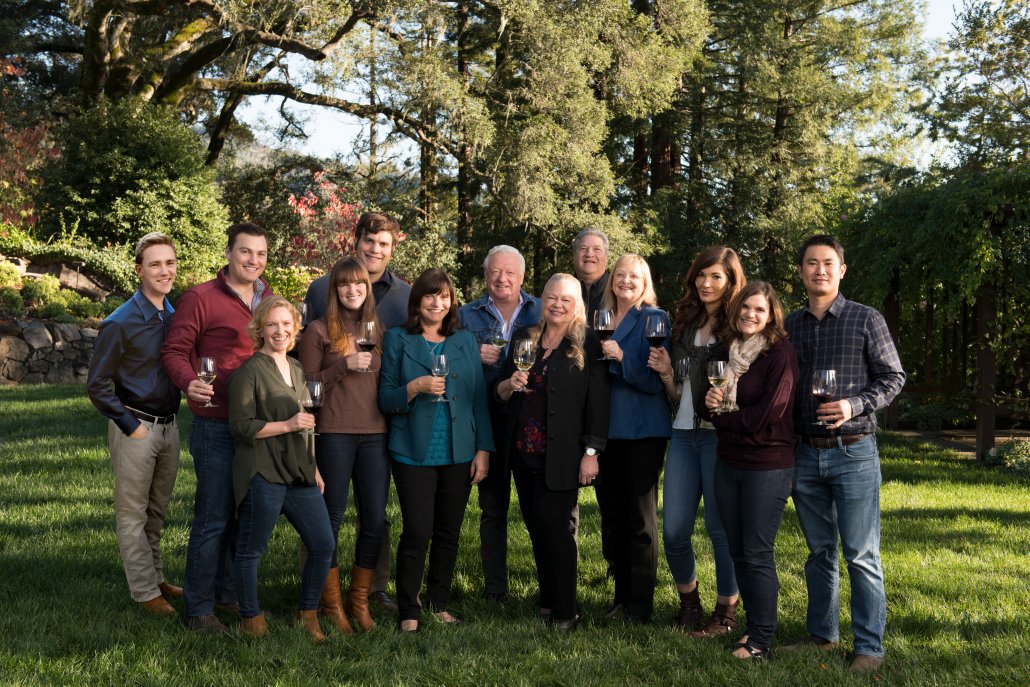 At La Crema, excellence in the bottle begins in the vineyard. The year 2019 marked La Crema’s 40th anniversary—fittingly its “ruby” year of eliciting the very best of the vine. This success is as much about the winery’s vision and commitment to quality winemaking which is rooted in the vineyards and soil.

The metric for success differs between all wineries. For some, it’s the amount of cases sold, but for La Crema, Don Hartford says, “at La Crema I think we’re really trying to gauge success by the number of people who love our wines.”

As La Crema looks to the future, it will continue to focus on cool-climate Burgundian-style wines and produce appellation-specific and single-vineyard bottlings from exceptional sites in California and Oregon. From bud break to finished bottles, the commitment to high-touch winemaking ensures consistently distinct, elegant and naturally balanced wines. These were the standards established years ago; and remain the principles by which the winery lives today.