Fast forward to summer with these delicious recipes and pairings from Chef Tracey Shepos Cenami and Wine Educator Ben Fine.

The sweet, mild flavor of steamed corn with Chardonnay is a classic summer pairing.  The creamy texture of the pasta in this Corn, Fregula & Sun Gold Tomato Salad matches the elegantly layered richness of the 2018 Tidal Break Vineyard Chardonnay.

Flat iron steak can be the center of a fresh, fast meal, all made in a single pan – exactly how we prefer to cook at home in the summer!  You can even take the whole thing outside and set your skillet right on the grill, so the house stays cool and smoke-free.  Try this dish with our 2017 Bellflower Vineyard Pinot Noir to take your meal to the next level! 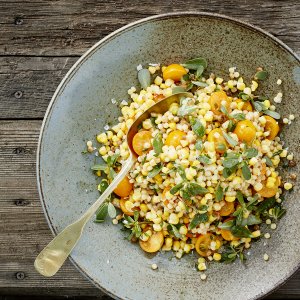 Fregula looks like a grain, but it’s actually a toasted semolina pasta, similar to Israeli couscous. We love to combine it with corn kernels because the two look similar, but their textures are total opposites. The chewy fregula and the crunchy pop of the corn are a fun contrast. The recipe includes a simple technique for cooking the corn: you put the raw kernels in a colander and drain the just-cooked fregula and water right over them. That quick boiling-water bath is all the cooking fresh summer corn kernels need for a salad like this. 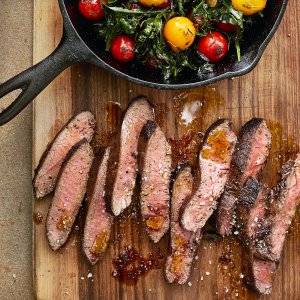 Flat iron steak is very flavorful, and we think pan-searing is the best way to keep it tender and juicy. Leftover seared steak can be chilled and sliced thinly for salads. It’s great tossed with arugula, juicy summer tomatoes, good olive oil, and burrata or crumbled blue cheese.