Following the Russians’ 1842 abandonment of California, the Pomos hardly had time to breathe a sigh of relief. With the Gold Rush kicking off 170 miles east, life in Russian River Valley was set to change forever. 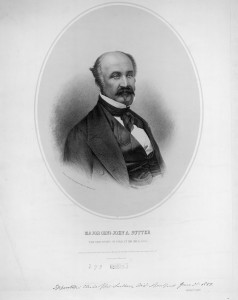 In 1848 when John Sutter, the same man who purchased Fort Ross from the Russians, discovered gold at Sutter’s Mill, thousands of Americans and foreigners made the dangerous trek to the Sierra Foothills to seek their fortunes. 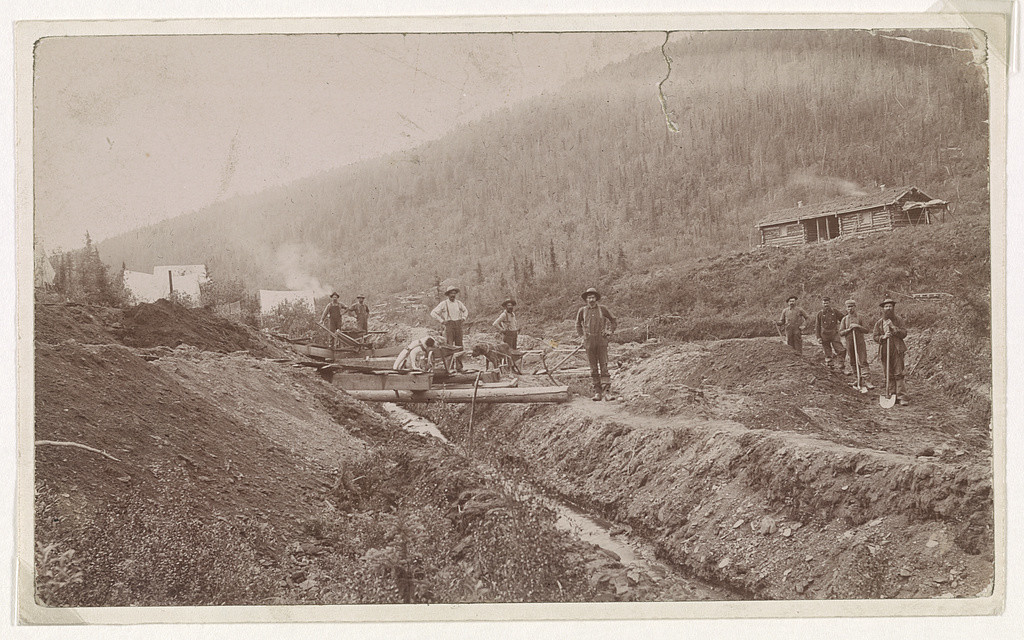 And while a handful got rich; most did not. The rigors of mountain living, especially during the Sierra’s harsh winters, were trying and discouraging. Many packed up and set out for the San Francisco Bay Area to become tailors, farmers, laborers, grocers, bricklayers, sawyers, and winemakers. 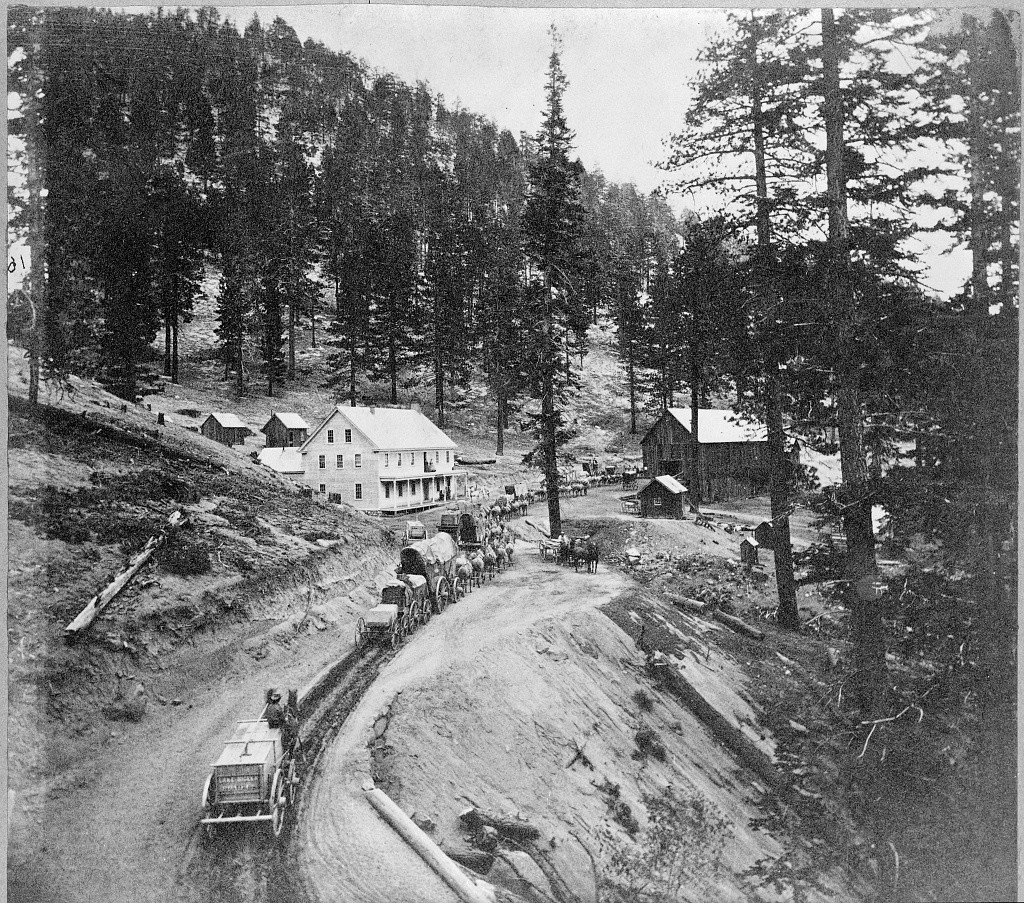 Yet even before the invasion of the Forty-Niners, white settlers were tentatively staking claims in the Russian River Valley. As early as 1835, General Mariano Vallejo, the last Mexican commandante of Northern California, sent a band of explorers from his headquarters in Sonoma to explore the lands extending to the sea. He promised to grant them large tracts “right upon the border limits of the Russians’ claims.” When the Russians gave up those claims, the invasion exploded: Scots, Germans, English and French. An eccentric Hungarian, Agoston Haraszthy, founded Buena Vista, in 1855, in Sonoma Valley. 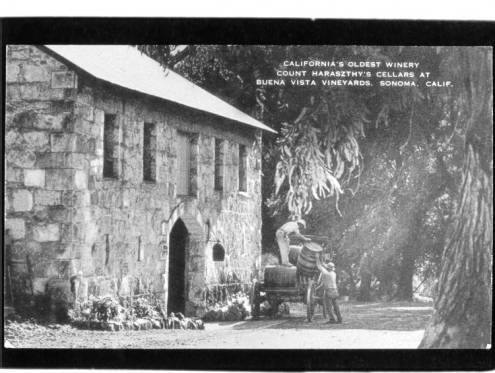 By the 1880s, these pioneers were joined by another group, the Italian-Americans, who were flocking from Piemonte, Toscana and Campania to seek a new life in America. The best-known Italian-American settlement was in Alexander Valley, named after the remarkable wanderer and adventurer, Cyrus Alexander, who in the early 1840s established a ranch near Healdsburg. But it was a few miles upriver near Geyserville, where in 1880 an Italian-American from Genoa named Andrea Sbrabaro—who had been a failure as a gold miner—established a homestead on the Russian River and named it Asti. Here was the beginning of Italian-Swiss Colony, which brought Italian immigrants into the area by the hundreds and made Zinfandel a household word. 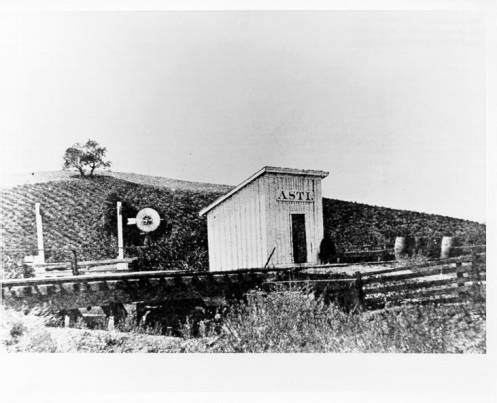 Asti, the beginning of the Italian-Swiss Colony
Courtesy, the Sonoma County Library

The Russian River Valley too achieved fame. By 1881, a Guerneville newspaper reported “a lively boom…in the setting out of vineyards.” Around that time, two large wineries were established: the Twin Fir farm, near Forestville, and the granddaddy of them all, Korbel, located beyond Guerneville. By 1891, a census recorded nearly 4,000 acres of grapes growing in the Russian River Valley. Most were old-fashioned “bush vines,” comprised of red varieties like Grenache, Mourvèdre (Monastrell), Carignane, Alicante Bouschet, Petite Sirah and Zinfandel. The Italian-Americans generally harvested them all together, producing “field blend” wines. Some of these ancient vineyards still exist today and are highly coveted. 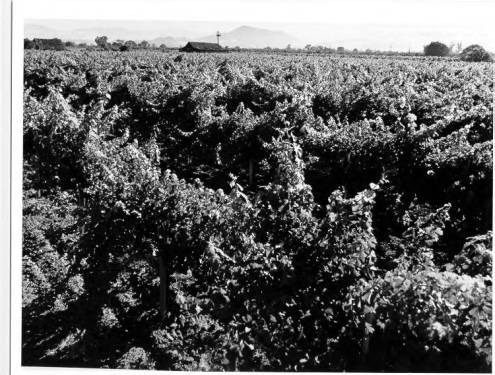 Sonoma, and the Russian River Valley, had a healthy wine industry throughout the early decades of the 20th century. But events were conspiring to snuff it out. Conservative and religious voices preached the evils of alcohol and managed to establish the 18th Amendment to the U.S. Constitution in 1920, outlawing “the manufacture, sale, or transportation of intoxicating liquors within, the importation thereof into, or the exportation thereof from the United States and all the territory subject to the jurisdiction thereof.” A handful of wineries were granted permission to produce sacramental wine for the Church, but the majority of American (which is to say, Californian) wineries closed their doors forever. It was a blow from which it would take Sonoma County a long time to recover.

Celebrating the repeal of Prohibition
Courtesy, the Sonoma County Library

NEXT: We’ll see how the Russian River Valley struggled to re-establish itself after Prohibition, eventually finding its footing in the explosion of “boutique” wineries of the 1960s,1970s and 1980s.