Why Does Wine Go Bad and How Long Opened Wine Lasts

One of the most common questions that I get from students in my Introduction to Wine classes is about bad wine. People want to know, why does wine go bad, how do you know if a wine has gone bad, and can you do anything to prevent it?

Why Does Wine Go Bad?

There are lots of reasons a wine can go bad. Poor bottling, microbial contamination and storage problems are just the beginning. Each of these issues has specific signs to look for, which makes it easier to tell a wine that’s gone bad from a wine that’s just not to your taste.

A common reason that wine goes bad is that, after it was opened, no one drank it fast enough. (This is not usually a problem around my house, trust.) That’s because the moment you pull the cork on a bottle, powerful chemical changes start to occur in the wine. Oxygen rushes in and sulfur dioxide, which is added to nearly all wines as a preservative, dissolves into the air.

In time-limited doses, exposure to oxygen can make a wine taste more harmonious and expressive, turning up the volume on its flavors and smoothing them out. But the clock is ticking: in as little as two days, oxidation can spoil a wine and, soon enough, this process will turn it to vinegar. First, the fruity aromas disappear, then its flavors turn dull and flat, with a sharp or bitter edge, and the color changes. White wines darken and turn brownish; reds get lighter and browner. Soon, a wine that used to smell like apples or cherries may smell like vinegar or cider.

Now that you know how oxidation affects your bottles, you’re probably wondering how to extend the life of opened bottles.

How to store opened wine without it going bad depends on the type of wine and how you store it. The graphic below breaks it down. Generally, the lighter the wine, the faster it goes bad. Tannins in wine help preserve them as does alcohol—which is why robust reds and fortified wines last longest. Richly sweet dessert wines will also stay fresh longer than dry varietals. 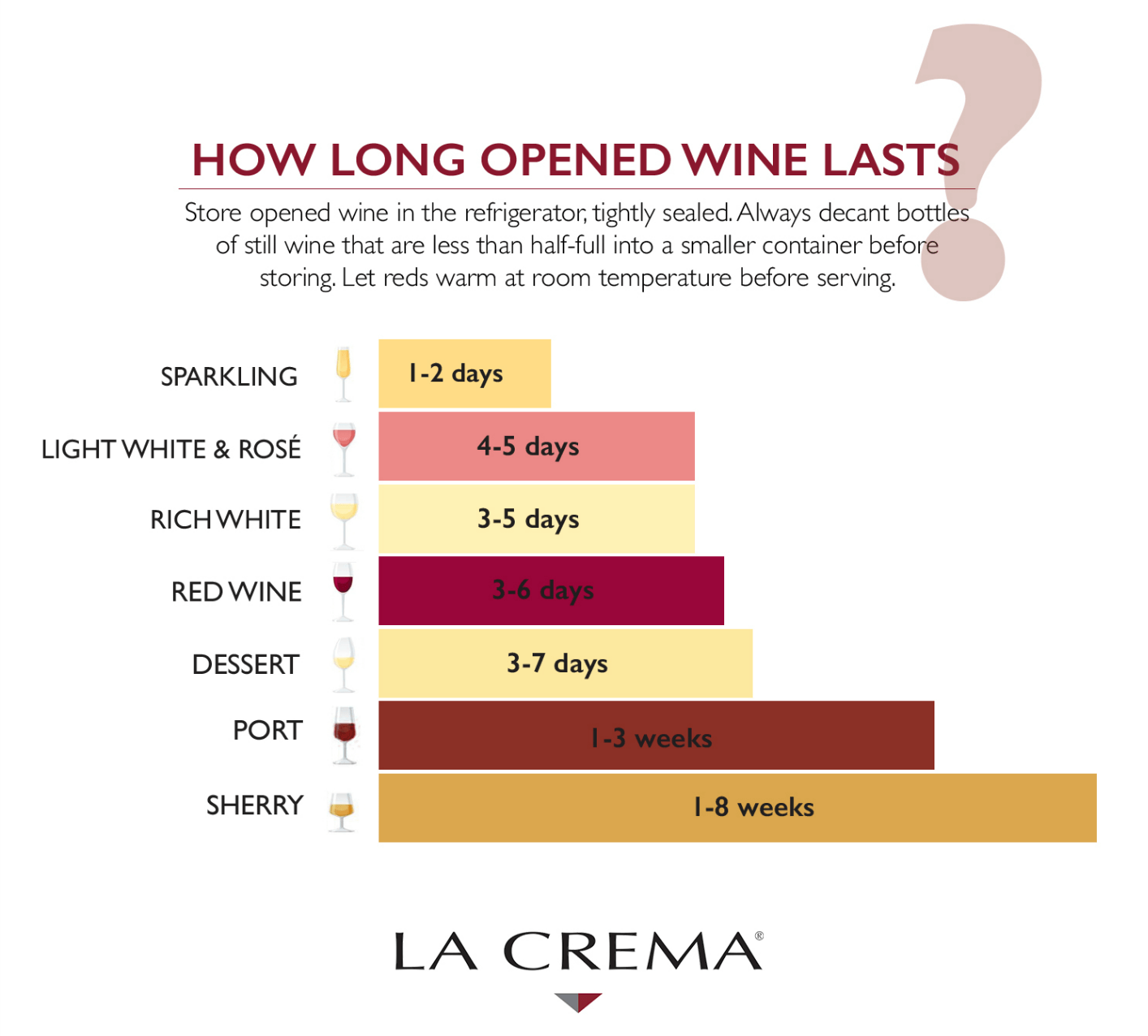 My go-to method of slowing down the spoilage of opened wine—both red and white—is to decant it into as small a container as possible and stick it in the fridge. I keep a few empty half-bottles (375ml) and their corks handy for this, but any old jar will do (just make sure it doesn’t still smell like kimchee or barbecue sauce or whatever you last had in your fridge). Presto! This step roughly doubles the shelf life of wine.

“Even reds?” you’re asking. Yes, even reds. The bacteria that turn wine into vinegar (acetic acid, to wine chemistry geeks) feed on oxygen. By exposing the wine to less oxygen, you’re starving the bacteria and slowing down spoilage. They also multiply like crazy at room temperature, so chilling the wine keeps their party to a dull roar.

Of course, there are lots of gadgets out there claiming to preserve wine, ranging from plastic vacuum pumps to spray cans of nonreactive gas. In my experience, with one giant exception, none of these make a huge difference. I recommend that, if you do pump or gas your wine, you also store it in the fridge.

The shining exception to these devices is the Coravin, which is easily the most effective—and expensive—tool ever invented to solve the problem of leftover wine. With Coravin, you don’t actually open the wine at all—you extract it through the cork via a fine needle, which also pumps argon gas into the bottle as a preservative. You can dole out glasses of wine over a period of months from a bottle, with no notable difference in freshness. I’ve enjoyed white wines that were first poured via Coravin more than a year prior, then stored at room temperature, and they still tasted juicy and vibrant. At parties, I sometimes let guests have sips from several “Coravinned” bottles, then pick the wine they like best.

Remember: It can be tricky to decipher whether a bottle has gone bad from something that just isn’t your taste. At the end of the day, if the smell and taste aren’t to your liking, listen to your senses. This could be due to a poor pairing or perhaps the type of wine and where it’s from just isn’t pleasing your palate. At the end of the day, you should always drink wines you enjoy.