Rich stews and braises are one of my favorite things about North African cuisine. I often call my Moroccan-ish stews tagines, because that’s what they are inspired by. But the word tagine technically refers to the dish in which the stew is cooked. The cone shaped pot allows slow cooking over a low fire without too much evaporation, so you can cook meat long and slow while a rich sauce forms around it. Since I don’t actually own a tagine, it’s a bit of a misnomer to call my recipe that. So I’ll be precise and call it Moroccan Braised Lamb Shanks, instead. 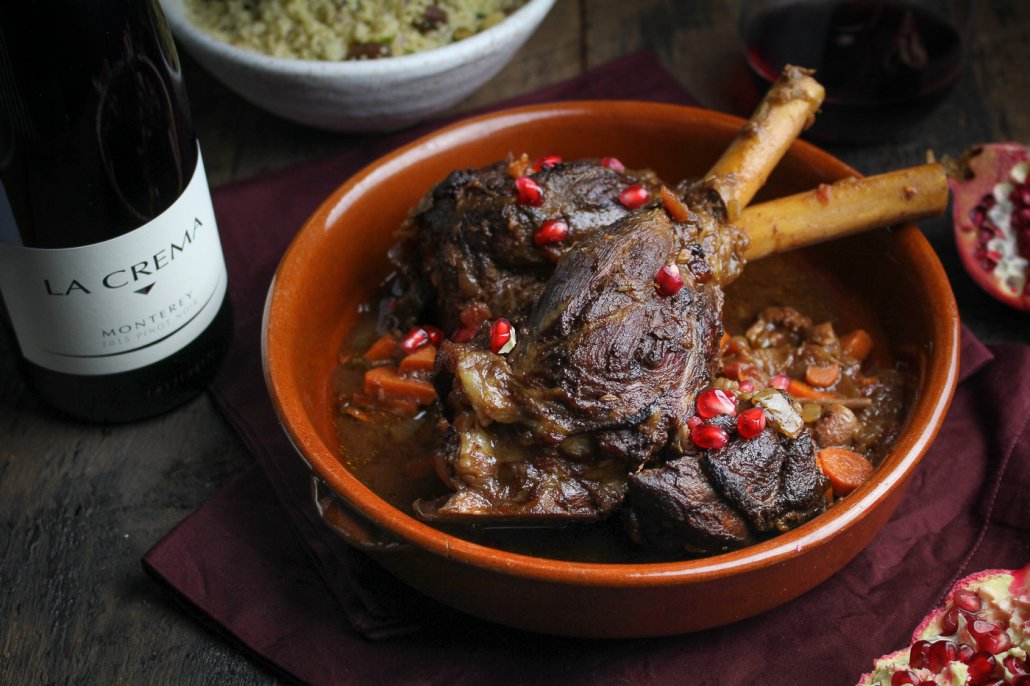 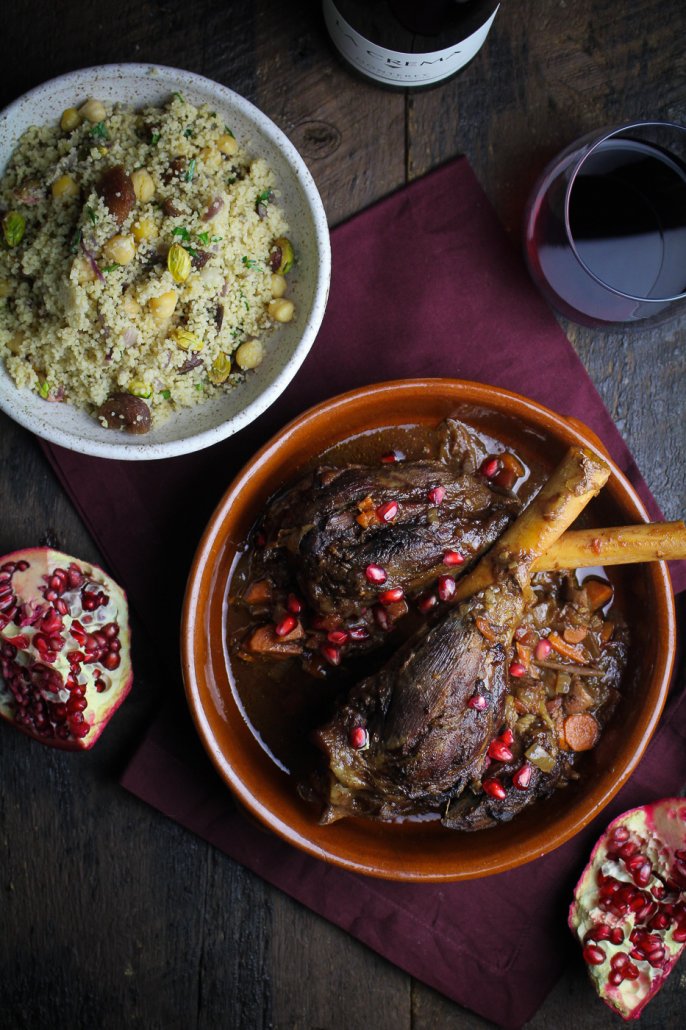 So what differentiates Moroccan-style braised lamb shanks from any other braised lamb dish? For me, it’s the spices and the dried fruit. Most tagines and Moroccan braises have at least one type of dried fruit, such as apricots or dates. They also use warming spices like cinnamon and ginger. For this recipe, I’ve also added pomegranate molasses, Pinot Noir, tomatoes, and broth to the braising liquid. After 2-3 hours in the oven, the shanks are meltingly tender and the sauce is thick and sweet. It’s absolutely delicious on its own or over couscous. 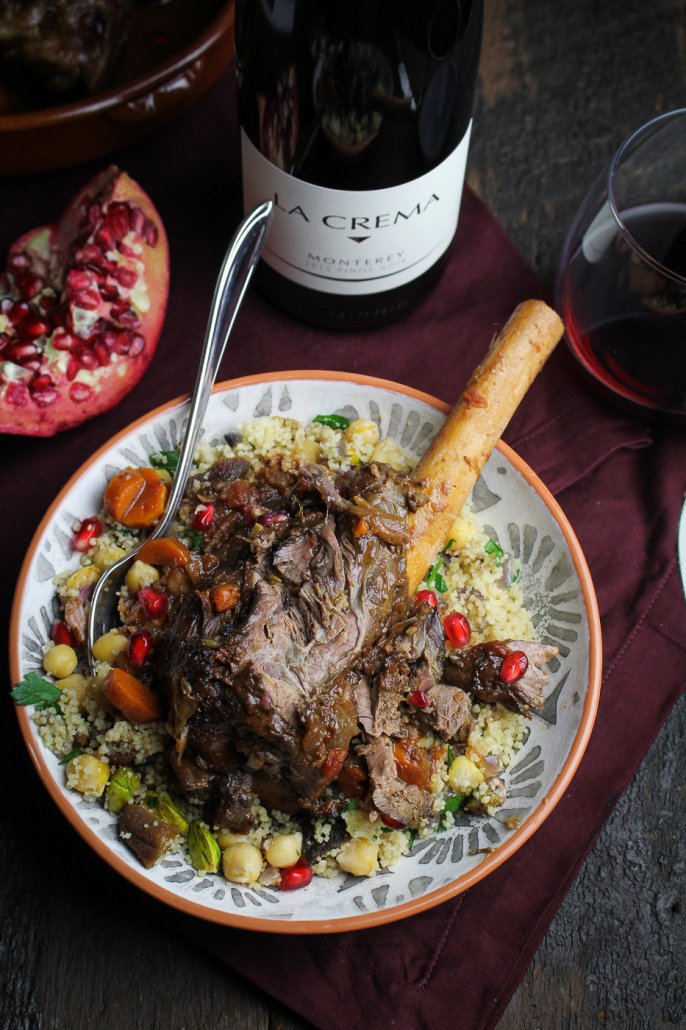 A word of caution: lamb shanks can be very fatty. Before you begin cooking them, cut off and discard as much of the opaque white fat as you can. I sometimes also loosen or remove the silverskin that surrounds the muscles, although removing too much of it will cause the shank to fall apart. After cooking, be sure to skim off as much of the liquid fat as you can before serving. A little fat is ok, but too much will ruin the mouthfeel of the dish, in my opinion. 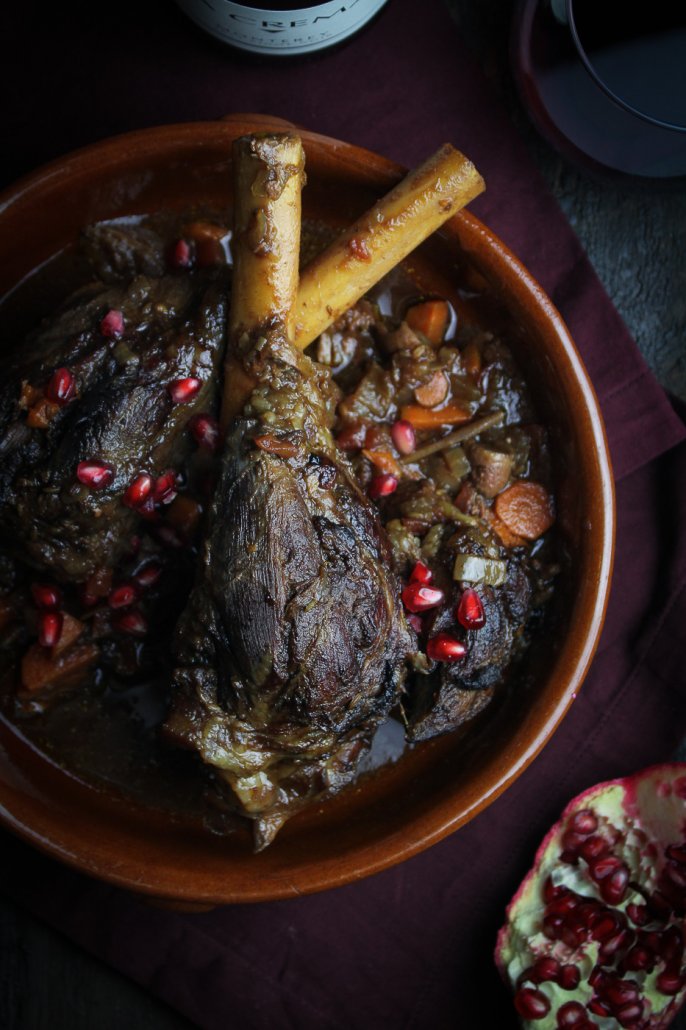 Author: Katie Morris of Katie at the Kitchen Door

Inspired by recipes in the New Book of Middle Eastern Food